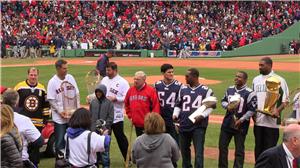 The champions and former Boston Mayor Tom Menino at the Fenway pregame ceremony.
by Steve Silva, Boston.com
FINAL: Brewers 6, Red Sox 2The Brewers took the lead back in the bottom of the ninth when Lyle Overbay hit a two-run double and Carlos Gomez singled in Overbay to put Milwaukee ahead 5-2. The Brewers made it 6-2 on a single by Aramis Ramirez, which ended a disastrous Fenway debut for Edward Mujica, as the righthander was pulled before the inning was over.
Red Sox third baseman Will Middlebrooks homered over the wall in left field to tie it up 2-2 in the third inning here at Fenway.
In the bottom of the second, Grady Sizemore drove in Mike Napoli with a base hit for the first run of the day for the Red Sox with the help of an error by the Brewers.
Milwaukee jumped on Jake Peavy for two runs in top the second inning in the home opener at Fenway Park.
See photos from the Red Sox' home opener and ring ceremony here: http://bo.st/1efFbFQ
Follow the live updates below:
3rd & 7 37yd
3rd & 7 37yd
B
S
O
close
close