Stephen Drew hit a solo homer and Shane Victorino drove in four runs to give the Red Sox an insurmountable lead. 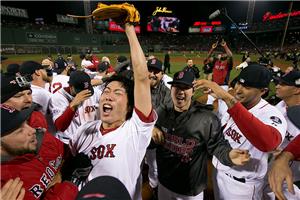 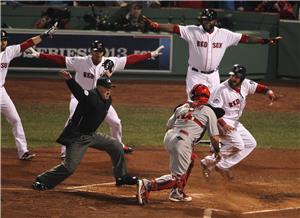 The party is getting started at Fenway tonight. (Photo by Bill Greene / Globe Staff)
by Steve Silva, Boston.com on Oct 30, 2013 at 10:14 PM
The Red Sox have won their third World Series title in 10 years and eighth overall, beating the St. Louis Cardinals 6-1 Wednesday to take the Fall Classic, 4-2.
It was the first time the Red Sox had claimed a World Series title at home since 1918.
David Ortiz was named the 2013 World Series MVP. He had a .688 average, two home runs, and 6 RBIs in the series.
"I knew that it was going to be a special year," Ortiz said. "And when we started rolling, nobody stopped the train."
It all jumped off in the third inning when the Red Sox loaded the bases. Victorino crushed a double high off the left field wall scoring three with two outs to open the game up for Boston. Ellsbury singled to right to start the rally, and the Cards finally gave up and intentionally walked Ortiz. With two outs, Jonny Gomes was hit by a pitch and then Victorino drove in three with a line drive that would have been out of most ballparks. Victorino had been 0-for-10 in the Series prior to the three-run double.

In the fourth, the Sox sent nine men to the plate before the embattled Stephen Drew led off by smoking a Michael Wacha pitch to dead center for his first homer of the postseason to send Fenway off the rails with a 4-0 Boston lead. Mike Napoli later knocked in Jacoby Ellsbury with an RBI single off Lance Lynn -- who came in for St. Louis after Wacha was knocked out of the game. Shane Victorino then singled to left to drive in the twice-intentionally-walked Ortiz with the sixth Boston run, the fourth RBI of the night for Victorino.
John Lackey, the winning pitcher, went 6.2 innings, giving up only one run in the bottom of the seventh on an opposite field single by Carlos Beltran to knock in Daniel Descalo. Lackey convinced manager John Farrell to let him stay in, walking Matt Holiday on the following at-bat, to load the bases before he was pulled. He allowed nine hits, walked one, and struck out five in 30 batters faced. He was replaced by Junichi Tazawa, who promptly got Allen Craig to ground out and get out of the jam.

"I wanted to stay in there," Lackey said. "I wanted to get myself out of that inning. Didn't work out. But [Tazawa] came in, did a great job. … great team win, for a great team."

Brandon Workman took over in the eighth inning for Tazawa. He got Yadier Molina to fly out to right field, before Matt Adams and David Freese grounded out to go 1-2-3.

St. Louis reliever Trevor Rosenthal, coming in with one out in the eighth inning and Pedroia on first, balked with Ortiz at the plate before intentionally walking him. With two on, he struck out Napoli and got Jonny Gomes to ground out, leaving the Red Sox with a chance to close it out Koji Uehara headed to the mound.

Uehara got Jon Jay and Descalso to fly out to left field before fanning Matt Carpenter to end the game.

Craig had gotten his second hit off Lackey in the fourth inning. Dustin Pedroia was eaten up on a ground ball by Molina for an error and there were two on with one out. But Lackey got Adams to fly out to left and Freese struck out looking to end the threat.
After Lackey left a couple of 91-93 mph fastballs over the plate in the second inning, giving up back to back hard singles to Craig off the Wall and Molina, he threw a wild pitch and looked to be in trouble. But the big righthander got out of the jam without giving up a run as he fanned Jon Jay swinging and showed the emotion of the moment by shouting as he walked off the mound.
In the bottom of the second, Jonny Gomes singled to center and Victorino walked to start a rally for Boston. But Xander Bogaerts came up and popped up to Molina on the first pitch he saw and Drew followed by popping out to first, and David Ross ended the inning by whiffing on a 96 mph fastball from Wacha. Bogaerts has looked very much like a rookie tonight, taking some ill-advised swings early.
Ellsbury looked to be picked off first base in the bottom of the fifth, but he was able to outlast the four relay throws from the Cards and duck back to first base. It's been that kind of night for St. Louis.
Wacha would last 3-2/3, giving up five hits, six runs,  four walks (two intentional to Ortiz), a hit batsman, to go with five strikeouts. The moment finally got a little too big for Wacha.
3rd & 7 37yd
3rd & 7 37yd
B
S
O
close
close