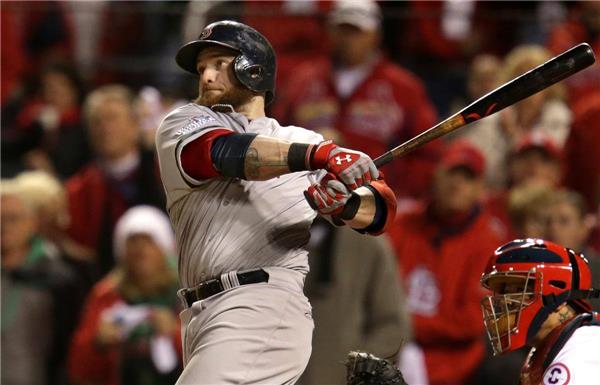 Jonny Gomes smacks a three-run homer in the sixth inning in Game 4.
by Steve Silva, Boston.com
And the World Series will be coming back to Boston.
Jonny Gomes, strong on personality and stronger at the plate in Game 4, crushed a three-run homer into the Red Sox bullpen in the top of the sixth inning to give Boston a three-run lead.  Strong relief pitching by Felix Doubront, Junichi Tazawa, John Lackey, and Koji Uehara closed out the Cardinals at Busch Stadium tonight with the Red Sox coming out on top, 4-2.
"I don't think I'm that good to plan out my home runs in World Series," Gomes said.  "All I wanted was the opportunity. Whether it was to pinch hit or a start. I got the opportunity tonight. One thing you can guarantee, if I'm in lineup I'm going to be swinging. I got a good pitch to hit."
Uehara finished off the Cards with a pick-off throw to first base that got pinch runner Kolten Wong for the final out.
"That was on his own," Red Sox manager John Farrell said. "We were talking about some things in the dugout about positioning, because we've used the shift against Beltran. And [coach Brian Butterfield], Torey [Lovullo], and I were talking at the time, we didn't want to give up the potential for a bunt base hit, with [Matt] Holliday swinging the bat well on deck. In the conversation, he picked him off and the game was over. It was all on Uehara."
In the sixth inning, after Cards starter Lance Lynn gave up a two-out single to Dustin Pedroia and a walk to David Ortiz, reliever Seth Maness came on and promptly served up the long ball to Gomes who started in place of Shane Victorino who came down with some back stiffness before the start of Game 4. The homer was Gomes' first career home run in the postseason. He's the first Red Sox player other than Ortiz to homer this World Series.
"During the game last night, [Victorino] started fighting it up a little bit," Farrell said. "The work we did didn't free him up enough before the game. As we went through the early workout, it became obvious he wasn't capable ... and his replacement came up with a three-run homer."
"With Seth [Maness], he's been a guy who's been able to help us all all season long, getting the big outs," Cardinals manager Mike Matheny said. "It just didn't work out tonight."
An interesting scene in the dugout before the start of the sixth was the sight of Ortiz giving a mini pep talk in the Red Sox dugout with players gathered around.
"Ortiz rallied us together," Gomes said. "As far as the message, I think we'll keep that in-house. That's the type of guy he is and the passion he has for the game. There's a presence. If this guy wants to rally us together, it was like 24 kindergartners looking up to the teacher."
In the eighth inning, Farrell made the risky move to go with Lackey -- on his natural throwing day -- in relief.

After Matt Adams grounded out to start the inning, Yadier Molina hit a sharp grounder to Bogaerts at third, but the rookie rushed the throw and it got past Mike Napoli wide of first base for a two-base error. A Lackey wild pitch moved Molina over to third, but the big righthander got out of the jam when he got Jon Jay to pop up to short and David Freese to ground out to end the eighth.

Chad Finn writes that the last time Lackey pitched in relief was June 27, 2004, Angels vs. Dodgers. Dave Roberts led off for the Dodgers that day. David Ross was the catcher.

The Cardinals had rallied back in the bottom of the seventh. After Doubront retired the first two batters, he gave up a pinch-hit double to Shane Robinson and Red Sox manager John Farrell came out and removed Doubront in favor of lefty reliever Craig Breslow, even though Doubront had fanned the next batter, Matt Carpenter, in the fifth inning.

The move backfired as Breslow gave up an RBI single to Carpenter to make the score 4-2, then walked the dangerous Carlos Beltran. Farrell then made a return trip to the mound to bring in Tazawa. It was the second straight zero-out performance for Breslow. Tazawa was able to get Matt Holliday to ground out to Pedroia to end the inning. Opposing batters are now 2-for-14 (.143) against Tazawa with runners in scoring position this postseason.
Boston starter Clay Buchholz gave as much or more than the Red Sox could have hoped for as he made it through four innings before leaving the game. He threw 66 pitches -- 38 for strikes -- gave up three hits, one unearned run, three walks, and two punch outs, and a wild pitch.
Doubront came on in relief to start the fifth and shut down the Cardinals 1-2-3, getting Carpenter and Matt Holliday looking on strikes. The lefty cruised through the sixth inning as well getting St. Louis 1-2-3, picking up another punch out by getting Matt Adams looking.
Before tonight, Doubront had not pitched on back-to-back days since Sept. 19-20, 2011. He threw 25 pitches over two innings in Saturday night's Game 3.
"Felix doesn't panic," Farrell said. "He stays very poised. It got a little hairy in the seventh... the relievers did great... Lackey got the ground ball to finish off the eighth."
The Sox rallied to tie the game in the the fifth inning. Ortiz scorched a line drive double to deep center field to start off the inning. Lynn then walked Gomes and Xander Bogaerts to load the bases with no one out for Stephen Drew. And Drew came through with a short sac fly to left field that drove in Ortiz for the Red Sox first run. The rally ended right there when Ross struck out swinging and pinch-hitter Mike Carp grounded weakly to first base.
The double was Ortiz's eighth career World Series extra-base hit, tying him with Dwight Evans for the most in Red Sox team history.
The Cardinals got on the board first as Matt Carpenter singled with one out in the third inning, but the ball took a bad hop and got by Jacoby Ellsbury and deflected to right fielder Daniel Nava as Carpenter advanced to second. Carlos Beltran drove Carpenter in with a base hit to center to make it 1-0 St. Louis on the unearned run via the Ellsbury error.
The Red Sox offense continued to sputter in the early going. The Globe's Kevin Paul Dupont wrote that in Games 3 and 4 in St. Louis, the Sox had one hit in the first four innings each game. Total: 2-for-25, .080.
In the second inning, Yadier Molina hit a one-out double then Buchholz walked Jon Jay as the Cards threatened. But Buchholz got out of the inning on a big strikeout of David Freese, painting the corner, then getting Daniel Descalso to ground out to short to end the inning.
According to MLB.com there was a two m.p.h. difference between Buchholz's fastball and changeup. His fastball was around 86-88 in the early going.
Meanwhile Cards starter Lance Lynn was throwing gas up to 95 m.p.h., had given up one hit with no walks and four strikeouts, throwing 50 pitches through four innings. He left the game after 5-2/3, throwing 89 pitches, giving up three runs on three hits, with three walks and five strikeouts. He looked like he had more left to give but Cards manager Mike Matheny yanked him in favor of Maness, who served up the homer to Gomes.
Game 5 is Monday night here in St. Louis and it will be a rematch of Game 1 starters Jon Lester and Adam Wainwright.
3rd & 7 37yd
3rd & 7 37yd
B
S
O
close
close