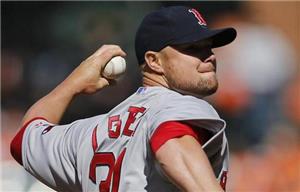 Jon Lester winds up on Opening Day
by Steve Silva, Boston.com
Final: Orioles 2, Red Sox 1
BALTIMORE - Jon Lester's nemesis got the best of him again. And new Orioles closer Tommy Hunter shut down the Red Sox rally in the ninth inning to close out the 2-1 victory for Baltimore in the season opener at Camden Yards.
Orioles outfielder Nelson Cruz crushed a first-pitch homer to left field to give Baltimore a 2-1 lead in the seventh inning... just as it was announced that Junichi Tazawa was warming for the Red Sox.
It was the third career homer Cruz has hit off Lester. He's 11-for-24 against the Sox lefty in his career including an opening day HR off Lester in 2011 when Cruz was  member of the Rangers.
Lester left the game after seven innings, giving up six hits, two runs, one walk, and eight strikeouts. He threw 104 pitches.
The Red Sox were 0-for-10 with runners in scoring position in this opener.
Comeback kid Grady Sizemore tied the game up at 1-1 in the fourth inning when he drilled a 3-1 pitch from Chris Tillman over the wall and off the fence in right field.
Sizemore's last two home runs were at Camden Yards -- before today, he hit the last one on July 15, 2011. Sizemore has now homered in three of his six career Opening Day starts. He also went deep in 2007 and 2008 as a member of the Indians.
The Orioles got on the scoreboard board first in the second inning. Jon Lester's troubles began with a walk to Nelson Cruz and a bloop base hit to center by Orioles catcher Matt Wieters. Delmon Young then grounded into a double play -- Dustin Pedroia to Mike Napoli to Xander Bogaerts -- but Cruz scored on the play.
With two outs in the bottom of the third, David Ortiz singled through the shift into right and Mike Napoli followed by ripping a double to left, but Ortiz was ultimately stranded at third when Mike Carp struck out swinging to end the threat.
Sizemore belted a single in his first at-bat in the second inning, his first major league hit since Sept. 22, 2011. Mike Carp singled before Sizemore but the Red Sox came away empty as Xander Bogaerts and A.J. Pierzynski flied out and Will Middlebrooks was caught looking at strike three to end the inning.
Starters Jon Lester (63) and Chris Tillman (79) combined to throw 142 pitches in the first four innings. Tillman was done after five innings, giving up the one run on the Sizemore homer, seven hits, one walk and four strikeouts.
Check out the live updates below:
3rd & 7 37yd
3rd & 7 37yd
B
S
O
close
close